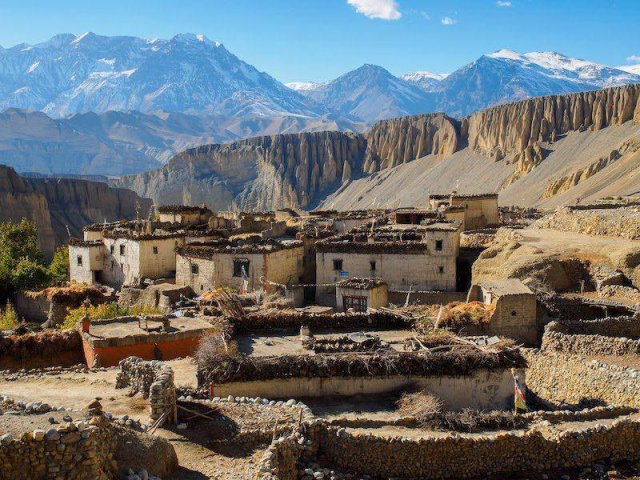 Upper Mustang residing behind mount Annapurna and Dhaulagiri, has captured most of the significant architecture and adopted the same kind of culture, tradition, and lifestyle of the ancient Tibetan community till date (a most preserved region in the world); which is one of the best places to trek in Nepal that takes into the real Tibetan environment.

The highest point to run every step towards the wilderness of Upper Mustang is around 4,000 meters above sea level.

The adventure of steep landscapes with a windy atmosphere, exploring the flora and fauna where mules carry loads along the way, having a peculiar food habit practiced by the people at upper mustang, and exploring the Himalaya's beauty more closely are some of the fascinating things that travelers get to encounter with.

The traveler gets an opportunity to understand the divergent culture of upper mustang practiced since classical times. Grab a chance to explore Amgyal Gompa, Tingkhar, King’s palace, amchi (traditional Tibetan doctor) museum and school; and many Gompas and monasteries presenting significant values.

The privilege to trek towards the world's most preserved area with a thrilling experience is a wonderful experience to hold once in a time. Upper Mustang region Known as the "Last Forbidden Kingdom" is now opened since 1992 for trekkers with special authority to which a permit approved by Nepal Government is given; after all the preservation of hidden arts, cultures, and primitive lifestyle of Himalaya people resides within this territory. Take a flight from Pokhara to Jomsom where the Upper Mustang Trek starts making it away from the unique place named "Kagbeni".

Crossing the Kali Gandaki bridges and some other small rivers, Kagbeni presents a number of time-honored villages and monasteries such as- the ancient Red monastery including the traditional musical instruments. From the view of hills, sheep raring, rolling the prayer temple, making steps forward, and passing through the prayers flags along with the breeze of Himalaya number of small settlements can be seen. The cluster of settlements in Chele, Ghilling, and Charang are some of the amazing balls of this region that make the visitors sense the ancient Buddhist culture, lifestyle, cuisine, housing pattern, and many more. The way now ahead towards the capital of the former kingdom, "Lo Manthang" were numerous of significant things many centuries ago such as-the home of the last king of Mustang, palace and monasteries of Jampalakhang from the 15th century, the monastery of Choede Lakhang from 18th century and many gompas and monasteries existing for thousands of years. Upper Mustang is a land rain shadow of Himalayas with the limited scattered greenery that can be visited throughout the year.

The man-made caves at Lo-Manthang at the higher cliffs seem to be a hidden story being hypothesized by many local people which can be true and lefts everyone wonder-struck. From Lo-Manthang with a spectacular picturesque of Upper Mustang to have the perfect taste of trekking to a wondrous land making a match up to extreme joy. The never-ending beauty of the Upper Mustang gives an adventure that is experienced one in a lifetime. Capture it from every corner. 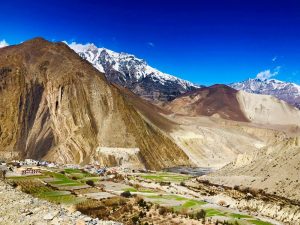 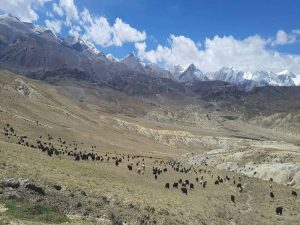 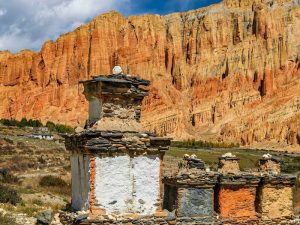 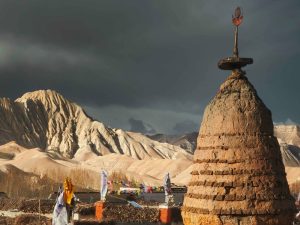 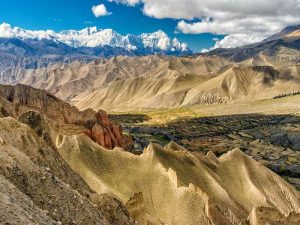 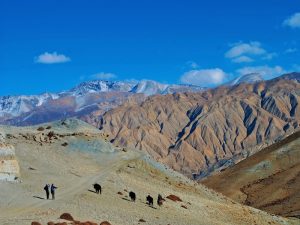 After you reach at the Kathmandu’s Tribhuvan International Airport, our representative would pick you at the airport’s entry gate and thereby, transfer you to the nearby hotel. In case of persisting time, you may visit the Kathmandu city or rest in your hotel.
Accommodation: Hotel or Resort as per your request.
Meal includes: Breakfast. In general we prefer BB plan for your stay in cities so you can choose varieties of tastes in different restaurants around the city

Day 03 Drive or Fly to Pokhara.

Trekkers should wake up as early as possible to take a flight of about 35 minutes to reach at Jomsom. During this time, you will be able to view few of the amazing naturistic views from the window of your airplane. Once you land in Jomsom, you will move ahead for your trek towards Kagbeni. By walking for about 3 to 4 hours, you will be able to reach at Kagbeni before sunset. In this way, you would end up with ample time for strolling across the entire village.

By passing from few rivers on a series comprised of various small ridges, trekkers would be able to move ahead towards Chele. During the complete trip, individuals will get the opportunity to find many white, red and black Chortens recognized as hallmarks of the popular upper Mustang region.

Trekking from Chele towards Geling would continue during the morning time by hiking on various undulated mountain trails. Finally, on this day, you will be able to visit a small village of the district, where you find painted buildings in red color, which symbolizes the region’s famous monasteries.

We will continue with our trek from Geling to reach Dhakmar. Here, you will find an oldest Tibet monastery named Lo Gekar Monastery built during the eighth century by a worldwide famous magician of Tibet named Guru Rinpoche

On our 8th day of trekking, our trail will broaden and let us get the first view of Lo Manthang, known popularly as the walled city. Since the city has a single entrance, we have to circumambulate the wall towards the gate present on its northeastern corner. We will start with our return journey via the upper highland route and again get dramatic views of the Charang Valley and Lo Manthang, along with snow cladding peaks in the background. Just before our settlement at Ko Gear, we will reach the Mustang’s oldest monastery named Ghare Gompa and finally have an overnight stay at Lo-Manthang.

Our trail will broad and let us to get the first view of Lo Manthang, known popularly as the walled city. Since the city has a single entrance, we have to circumambulate the wall towards the gate present on its northeastern corner. We will start with our return journey via the upper highland route and again get dramatic views of the Charang Valley and Lo Manthang, along with snow cladding peaks in the background. Just before our settlement at Ko Gear, we will reach the Mustang’s oldest monastery named Ghare Gompa and finally have an overnight stay at Lo-Manthang.

We will move to Yara Gaon by starting from the Lo-Manthang region by passing through the famous Lo La Pass.

Today we have an excursion hike to the 12th cave monastery of Nepal i.e. Luri Gompa and then, we return to Yara Gaon..

Today, we will take to reach Tanggye by walking for about 4 to 5 hours. During our walk, we can get continuous views of mountains.

We will trek via deep ridges and landscapes to hit the entire valley of Kali Gandaki and finally reaches to a high altitude village named Chuksang..

Today, we will take to reach Tanggye by walking for about 4 to 5 hours. During our walk, we can get continuous views of mountains.

Day 16 Fly to Pokhara. Sightseeing, boating or free for any other personal activities

We will wind up our trekking tour by taking a local flight to Pokhara. Here, you may participate in different activities, boating, sightseeing and other personal activities.

Day 17Drive from Pokhara to Kathmandu

Now, we will drive back from Pokhara to reach at the capital city Kathmandu.

Here, you will again get a spare day to view the beauties of Kathmandu City and be the part of shopping and various personal activities. In the evening, join with our dinner program with authentic Nepali cultural program..

Our team will depart you to the Tribhuvan International Airport, from where you will get the flight as per your own chosen schedule. 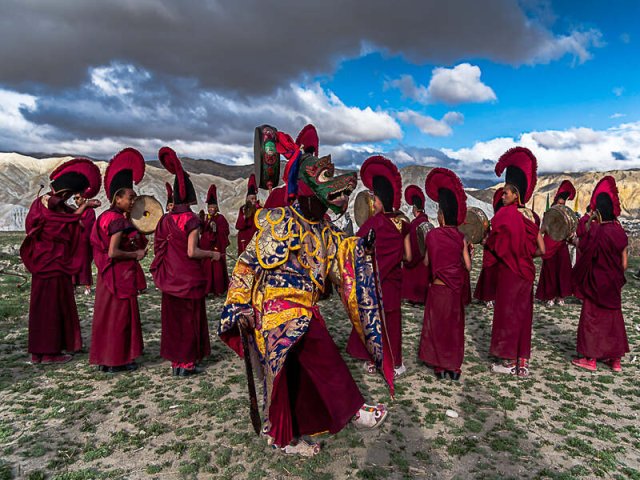 Tiji is a fascinating annual three-day festival consisting of Tibetan rituals celebrating the myth of a son who saves the Mustang kingdom from destruction. 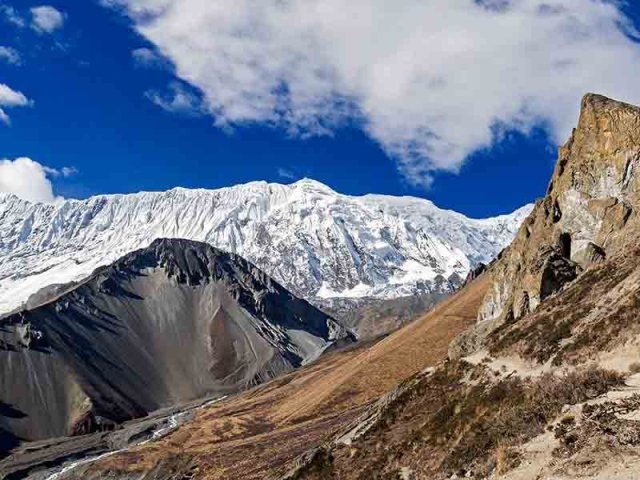 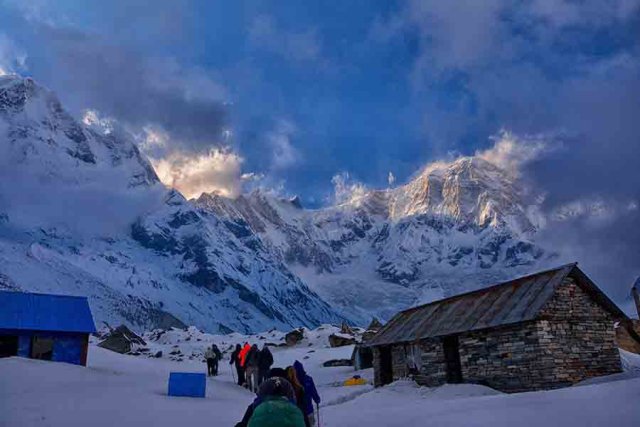 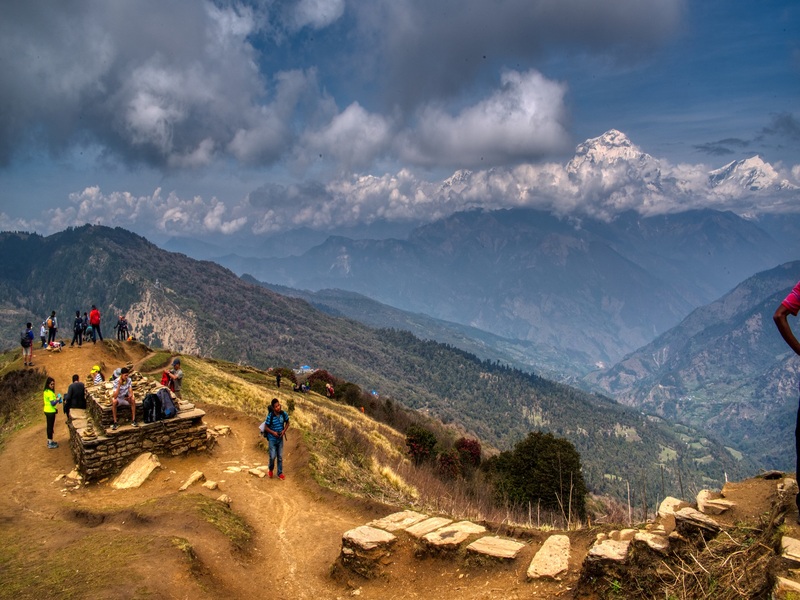 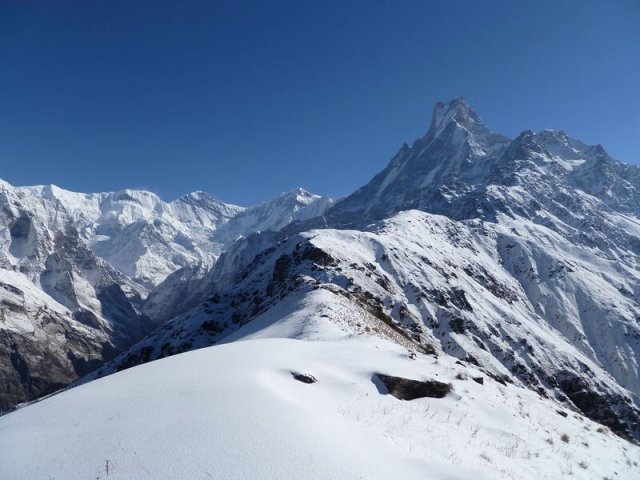 Stand between the lands covered by the magnificent Himalayas 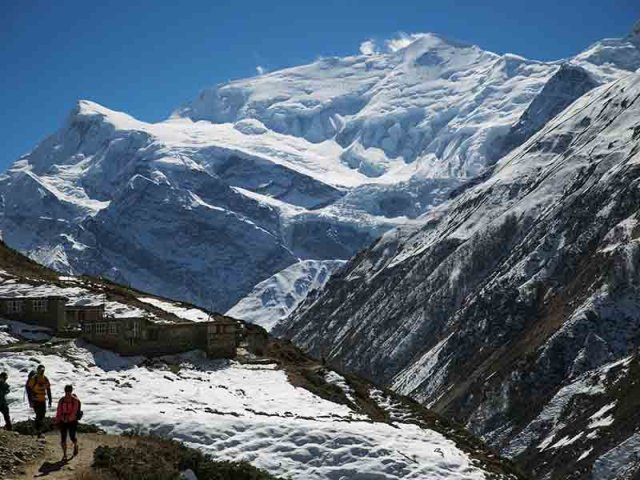