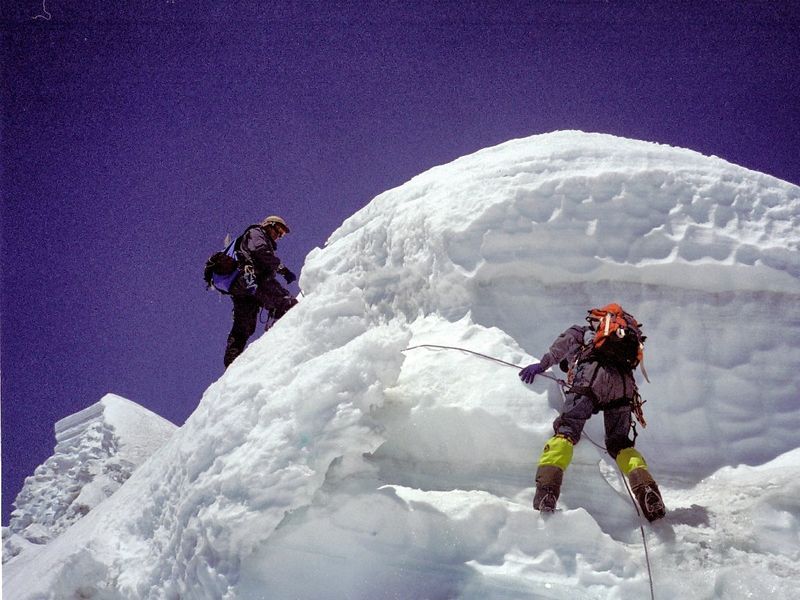 Mt. Pumori 7,161m/23,494ft is a mountain of Nepal magnificently standing on the Nepal–Tibet border in the Mahalangur section of the Himalayas. Mt. Pumori is located just a few kilometers west of the world’s highest Mt. Everest. The word Pumori means “the mountain daughter”. Sometime climber mentions Mt. Pumori as an “Everest’s Daughter”. Mt. Pumori Expedition is a popular adventure activity in Nepal which was firstly ascended by the German-Swiss expedition team in 1962. Two Czech climbers climbed on the south face in 1995. Although a 7,000er, Mt. Pumori is obviously is a daring mountain offering sections of untamed exposure requiring climbers to possess previous mountaineering experience and with excellent fitness level. Mt. Pumori Expedition is rewarded with brilliant photographic views of snowy mountains which include Mt. Lhotse and Mt. Everest.

The climb to Pumori is extremely popular and coveted as an introductory qualifying climb for Everest by many operators. Whatever your reason to climb it's a fun and fairly straightforward and accessible climb with relatively low objective danger. It is also a very nice introduction to climbing in the Khumbu region and a funny way to do Everest Base Camp trek with 7000m peak climb which is an easy, quick, and non-cumbersome acclimatization process. We arrange both the logistic assistance and guided climbing for the Pumori expedition. Climbing Pumori requires a moderate technical hop on ice and snow. The normal route for climbing is South East Ridge. 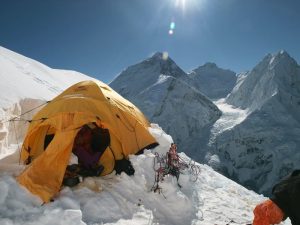 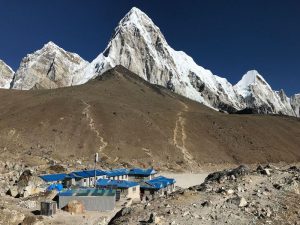 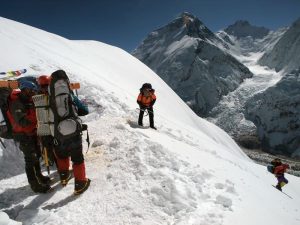 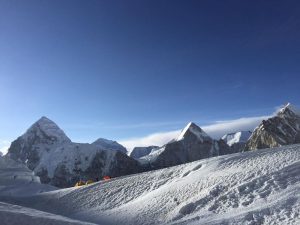 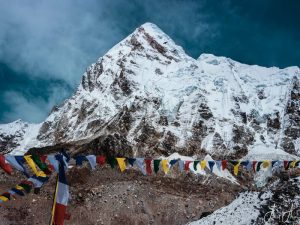 Land in Kathmandu International Airport and transfer to the hotel or resort by our tour representative. Overnight stay in Kathmandu. Relax.

Spend the day on the guided tour to Kathmandu. Kathmandu is the social and historical heart of Nepal. Visit its world’s heritage sites like Bauddhanath, the Tibetan Buddhist landmark, and Pashupatinath and other sites. Additionally, meander through city bazaar to purchase some customary items of Nepal.

Take an early morning flight from Kathmandu airport terminal, a 30-minute mesmerizing flight. Land at Lukla airport (2800m). Start your trek to Phakding (2652m.) and stroll for around more than two to three hrs. While trekking, you head up the Dudh Koshi Valley on a trail to Phakding (2652m).

DAY 5Acclimatization day at Namche Bazaar and sightseeing of the location

Today, begin with a one-hour trek up to Syangboche (3800m.) for acclimatization above Namche. There you have the exceptional perspective of Mt. Everest, Nuptse, Ama Dablam, Thamserku, Lhotse and Kusum Kangaru. Overnight at a teahouse in Namche Bazaar.

From Namche, the trail shapes around the edge of the valley, high over the Dudh Kosi. Going through a few towns the trail plunges steeply to an extension over the waterway Dudh Koshi at Phunki Tenga (3250m). The village has a fantastic place for lunch and you can take a rest for some time before making the precarious move to Tyangboche. Reach Tyangboche and visit the biggest monastery of Khumbu district.

Go down through a woodland, cross the Imja Khola and climb consistently up to the Pangboche village. Have outstanding scenes of the mountain, with scattered pine trees and the Gompa, Mani walls in the forefront. Progressively raise the trail via thick forests loaded with thorny, juniper bushes. Reach Dingboche.

Today spend the day for some relaxing at Dingboche. with stupendous perspectives across Ama Dablam. Get acclimatized and training by our trekking guides for our challenging trail ahead.

Today we will start with a steep climb from Dingboche. Then we will continue on an easy trail giving breathtaking mountain landscapes. Land at Lobuche.

Today our trail begins from Lobuche via Gorakshep to reach Everest Base Camp. Our first stop is Gorakshep. At the beginning, the path is flat and easy to follow. We arrive at Gorakshep, the nearest “townsite” to Everest Base Camp. Leaving Gorakshep we headed on a narrow trail passing through wide valleys. There are some delightful flowers that line the way to base camp. We trek over the rocks and numerous prayer flags across the route. Reach the base camp. The Everest base camp region is a large glacier blended with rocks. Enjoy the picturesque landscape here.

This morning, the standard path starts at the Base Camp (5300m) situated above Gorak Shep on a little lake which will be our water source. The Base Camp is situated at the base of Kalapatther (5545m), which frames an enormous background for the camp. The camp is additionally hoisted over the Gorak Shep and henceforth it has astonishing mount Everest views.

Camp 1: After 3 hrs. of trail you will reach Advanced Base Camp (ABC) 5700m. Fixed ropes can likewise be required once in a while for hiking. Then at an altitude of 40 to 65 degrees slopes, you have to walk for the distance of 500m. There are many blended climb cross, rocks, steep and windy routes, some ice walls, narrow ridges, and furthermore, a passage that ascends on Mount Pumori. Camp 2: It starts at 6200m and is situated on a narrow moraine with no risk of a landslip. The trail follows to 400m of a track with an icy ascend of 35-65 degrees. Over 5000m high is the ice walls, numerous clefts, and risk of avalanche is there due to enormous seracs dangling from the shoulder of 6500m. Camp 3: The trail goes through the ridge to reach the elevation of 6850m, which is excessively breezy. You can view the Tibetan plateau from this spot. Ropes are vital due to several ice walls and crevasses on way to the summit. After that there are two climbing ranges; one from the Nepal side and another from the Tibet side. Out of these two ways, the Nepal side is less demanding to Mount Pumori Summit. After completing this trek, the Summit is not difficult to reach the peak of Pumori 7145m Going through crevasses, we ascend to Pumori cliff and after that to the summit of Mt. Pumori. The summit presents climbers with a few of the best perspectives of mountains around, for example, Mount Everest and Lhotse. The view gives you a photographic scene on reaching the summit.

Today we begin the descend from Pumori Base Camp to reach back to Dingboche.

Today we trail to Namche from Dingboche for about 6 hours. An easy trek down to Namche crossing through Rhododendron forest and leading to Namche which is a Sherpa village. Overnight stay at the tea house.

This is the last day of our trek. Start trail from Namche Bazaar en-route Monjo to Lukla. From Namche, we drop down through thick woods loaded with oak, rhododendron, and pine trees. With some short uphill ascensions and after that descend to the Bhote Koshi River, we will cross it three times. At last, an uphill trek will take us back to Lukla.

DAY 30Flight back to Kathmandu from Lukla Airport.

Early morning, we will board the Lukla Kathmandu flight. Our tour representative will transfer you to the hotel or resort in Kathmandu. Rest day at rest. .

Today is free for personal activities. Or our tour representative can help you to customize additional city tour.

After breakfast transfer to Tribhuvan International Airport. Return to home cherishing the memories of your adventure. 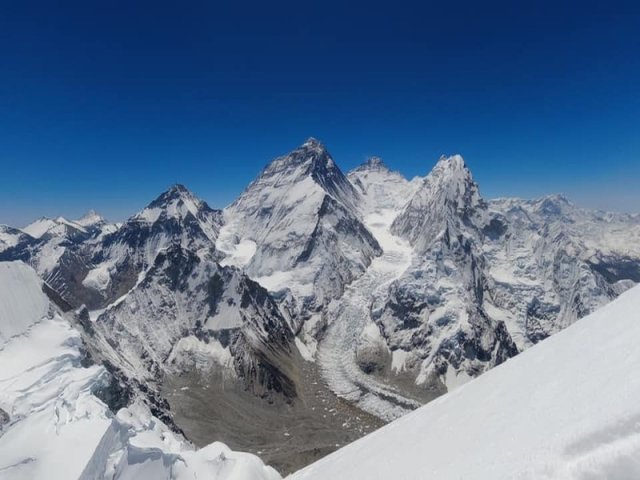 Mt. Everest Expedition, a pride of the world impressively standing as the world’s highest mountain. Mount Everest's height is 8,848.86 meters/29,029ft above sea level. Mount Everest country, lies in the Mahalangur Himalayas section of Nepal by making a line of a divider in between Nepal and China. 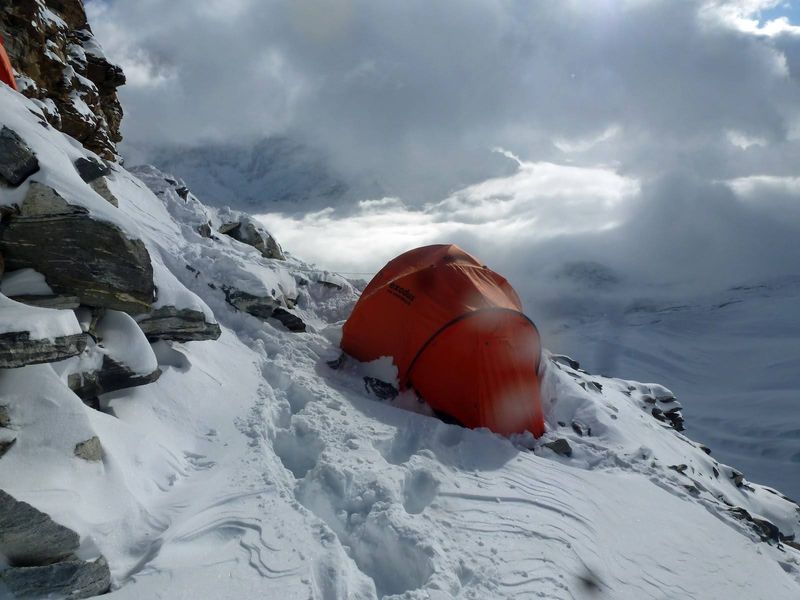 Mt Baruntse at 7,129 meters/23,383ft is a mountain of Eastern Nepal located in the Khumbu region. It is encircled by major three Glaciers; Hunku Glacier on the southern side, Barun Glacier on the Eastern side, and Imja Glacier on the northwestern side. As per the climbing history of Mt. Baruntse expedition.