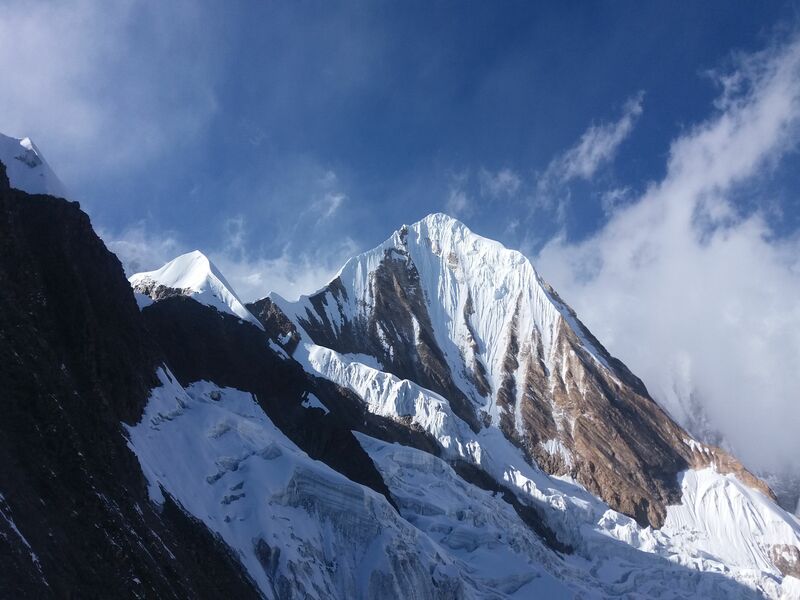 Singu Chuli Peak is also known as Fluted Peak, one of the trekking peaks in Nepal located west side of Mt Gangapurna and Annapurna Range with an altitude of 6,501 meters. Singu Chuli Peak Climbing requires ice climbing equipment, camping equipment, and all required equipment for peak climbing adventure. This package trip is suitable for those adventure seekers who have good physical strength and knowledge of peak climbing since it is quite harder than other normal trekking peaks. The peak Singu Chuli was first climbed by Wilf Noyce and David Coz through its northern ridge. This Peak Climbing with AMN Trekking and Climbing team is combined with Ghorepani Poonhill Trekking and Annapurna Base Camp Trekking, made with systematically arranged a day to day itinerary, proper acclimatization and excursion time, and experienced climbing crew to make the adventure holiday safe and enjoyable.

Officially regulated day to day itinerary of 23 days Singu Chuli Peak Climbing adventure package trip with Adventure Mountain Nepal Trekking and Climbing Pvt. Ltd begins after spending a day in the capital city Kathmandu with a day guided sightseeing tour around world heritage sites of UNESCO, preparation of essential equipment checklists & to get permitted for Singu Chuli Peak Climbing. Leaving Kathmandu, we drive to the beautiful Lake City Pokhara. After there, we take a short drive to Nayapul via Pokhara Baglung highway to reach the exact starting point of our Trek. The trek goes after complete Ghorepani Poonhill Trek continue the Annapurna Base Camp Trekking with along the route splendid views of Annapurna South (7.219m), Annapurna I (8.096m), Fish Tail (6.997m), Dhaulagiri (8.167m), Manaslu (8.163m) and several snow-capped peaks before we reach Annapurna Base Camp via Fish Tail (Machhapuchre) base camp.

After having a short and extraordinary time at the top, we safely retrace our steps via the same descend to Base Camp. After there, we follow the descends of Annapurna Base Camp Trekking and finally arrive at Pokhara via exploring Ghandruk and Potana villages to conclude Singu Chuli Peak Climbing Adventure. 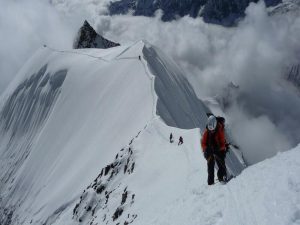 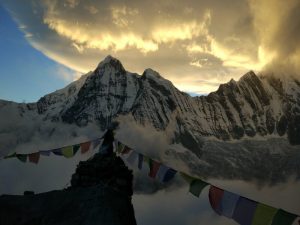 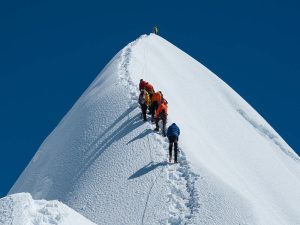 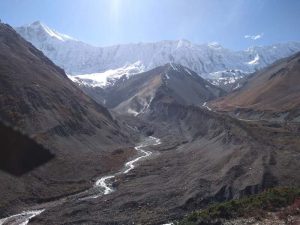 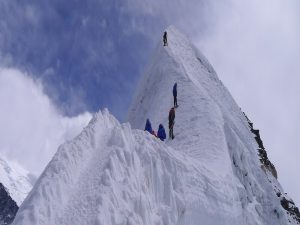 Adventure Mountain Nepal Trekking and Climbing’s airport arrival and departure representative will meet you at the airport as per your arrival schedule. He/she welcome you and drive to hotel. Check-in hotel and take a rest or relaxation time at Hotel. Then you can have a free excursion to know the surroundings and visit our office to get brief information of Ghorepani Poonhill
Trekking, we also conduct an introduction program with trekking leader and official team.
Accommodation: Hotel or Resort as per your request.
Meal includes: Breakfast. In general we prefer BB plan for your stay in cities so you can choose varieties of tastes in different restaurants around the city.

Early breakfast at hotel. Drive/ Fly to Pokhara. While drive on a bus it take 5-6 hours via Prithivi Highway where you can see beautiful Trishui River, Dense green forests, many green hills and several village settlements on the way. And if you choose airway it only take 25 minutes. Check-in hotel with welcome drinks. In the evening rest at Hotel or know the surrounding around lake side Pokhara.

Breakfast at the hotel. Then drive to Nayapul for approximately 1 and half hours. When we reach Nayapul we can take few times for refreshment hot/cold drinks before start the walk. Then we start trek to Tikhedhunga which take 3-4 hours walk. The trail ascends to Beritthati. Then we follow the east bank of Bhurungdi Khola to Tikhedhunge. Overnight at teahouse (Local Lodge) where you can taste different Nepalese cuisine.

Morning walk winds up on a steep climb for near 2 hrs on the stone steps to Ulleri village. From Ulleri, the trail ascends gradually through a colorful rainforest for few hours with few ups and downs. The walk leads nearer to Ghorepani, feeling the altitude and change of vegetation. Trekking in the midst of rhododendron woods till Ghorepani village is reached for the overnight stop, witnessing grand views of Dhaulagiri range of mountains in the west and Annapurna South in the north.

Today we start the trek early in the morning to Poonhill viewpoint for tantalizing sunrise views over the Himalayas which is located at the west side of Ghorepani village. We climb up through rhododendron, oak and bamboo forest. We can view several White Mountains including whole Annapurna range and Dhaulagiri from Poon Hill. After, taking precious picture we return back to Ghorepani for breakfast via the same trail. Leaving Ghorepani firstly we climb few ups to Deurali, a small settlement. Then we follow descend trail to the bridge and again climb an uphill to Tadapani which is a beautiful village from where we can have splendid views of Annanapurna and Machhapurchre mountains.

This day also trekking trail descending through forests till Siprong this takes about 2 hours. We cross by bridge and therefore the trail ascending gently until Gurjung 1 hour by walk and that we will have lunch there. Then after lunch, the trail goes slightly up and Pass the large landslide area and eventually we arrive in Chhomrong village which takes about 2 hours walk. this is often also Gurung village. The mountains are pristine and closer. Overnight in Lodge

In the morning after breakfast, we start our trek from this village and alight many steps until River and cross by bridge then gently ascent brings us in Sinuwa village which takes 2 hours. Then after the trail goes through the forests until Bamboo which takes about 1 & half hours and can have lunch there. After lunch, again we continue our trek through the forest path and lots of small streams. Finally we'll reach in Dovan after 1 and half hour walk. Overnight in Lodge.

This day also we follow the gently ascending deep forests way until Deurali which takes about 3 hours and that we will have lunch there. Then our trail goes through the Avalanche area in order that we should always take care during that period until Machhapuchre Base camp which takes about 2 hours. we will enjoy with magnificent and really closer view of mountains. Overnight in Lodge.

Early within the morning, we climb up gently until reaching Annapurna Base Camp which takes about 1 and a half hours. Then we will enjoy around 1 hour to ascertain the mountains and glaciers. We will see mountains like Annapurna I 8091m, Bahra Shikhar 7647m, Annapurna South Face 7219m, Hiun Chuli 6441m, Machhapuchre 6997m, Tharpu Peak 5663m, Singu Chuli 6501m then on. stay overnight in Lodge in ABC.

5-6 Hrs walk Full Board Tea Houses are not available–Tented Camps The base camp may be a flat rocky campsite , which may be reached along the trail from the Annapurna Base Camp. we'll be walking on moraines of the Annapurna Glacier. The geography here is stunning and may be felt only on the high altitude intrinsically . we'd be ready to meet other trekkers on an expedition in these areas too. Overnight occupy Tharpu Chuli Base Camp.

We'll be making an ascent to high camp today. A steep climb this path is rocky and it's advised that you simply take much caution when taking this route. We'll be blessed panoramic views of Annapurna I (8,091m), Fishtail (m), Annapurna South (7,229m). We'll reach high camp and found out the tents. we will spend the remainder of the day practicing for the trek on the subsequent day and learn to use the equipment for the climb. Overnight at High Camp.

Today is about aside for acclimatization alone. Spending overtime at a high altitude location will guarantee that we've a successful trip. We spend the entire day resting and exploring the majestic view. Overnight in Tent Peak High Camp.

After spending nice acclimatization day at the High Camp, we proceed through the trail which is usually snow-covered or icy. If necessary we should always use our crampons and make an uphill journey to succeed in Singu Chuli Camp I where we camp before heading further ahead.

Full Board Tea Houses are not available–Tented Camps

Today we'll have a most enjoyable starting to reach our destination. We depart early fully equipped and fully prepared. we'll slowly move up following the directions given by the experienced climbing experts of Nepal Guide Treks and Expedition. we'll overcome the primary a part of the climb which is quite technical. Then using the ropes, ice ax and other equipment we make the challenging climb to the summit. Once at the summit, we get the magnificent and rewarding views of gigantic mountains within the Annapurna Sanctuary, a natural amphitheatre. After spending some quality time over the summit, we descend right down to reach the Singu Chuli Camp II.

From Singu Chuli Camp II, we descend by retracing our steps and following similar trails back to succeed in the Tent Peak Base Camp for our overnight Camping

Day 18: Trek from Tent Peak Base Camp to Dobhan via Annapurna Base Camp & Machhapuchre Base Camp.

Day 19: Trek from Dobhan to Chhomrong.

Breakfast at a teahouse. Today we start our walk with around two hours ascend until we reach at upper Sinuwa and start descend before we reach at a small Khola which is originated from Annapurna South and Hiunchuli’s Glacier. We can make a stop at Lower Sinuwa to have a rest with refreshment drinks. After crossing a suspension bridge over the Khola, we start steep ascend all the way to Chhomrong village.

Today, we follow a rather easy trail by following long descend before reaching at Jhinu danda and again to Mardi Khola. After crossing a small bridge of Modi Khola, we immediately start following uphill all the way to Ghandruk Village.

Day 21: Trek from Ghandruk to Nayapul and Drive back to Pokhara.

After breakfast, the last day of our Annapurna Base Camp Trekking follows continuous descend until we reach at Syauli Bazaar. After there, we can catch a vehicle to Pokhara or continue easy and scenic straight trail all the way to Nayapul and drive back to Pokhara.

Day 22: Drive from Pokhara to Kathmandu.

Breakfast at the hotel. Drive/fly to Kathmandu. Remaining time is to feel free for leisure and personal activities such as Shopping, markets explore, spa, massage, rest and relax can be an option. In the evening, we will have a farewell dinner together with the entire team of Adventure Mountain Nepal.

Day 23: Final departure. Drop to airport as per flight schedule.

Our airport arrival and departure representative will drop you at Tribhuvan International Airport on your scheduled flight. Fly to your home with a wonderful memory of Nepal. 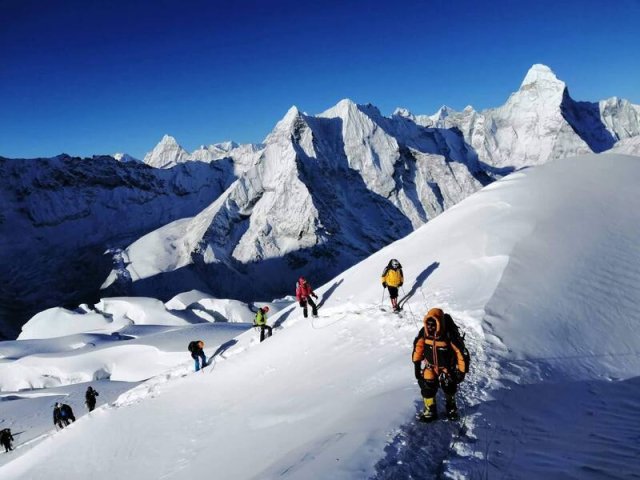 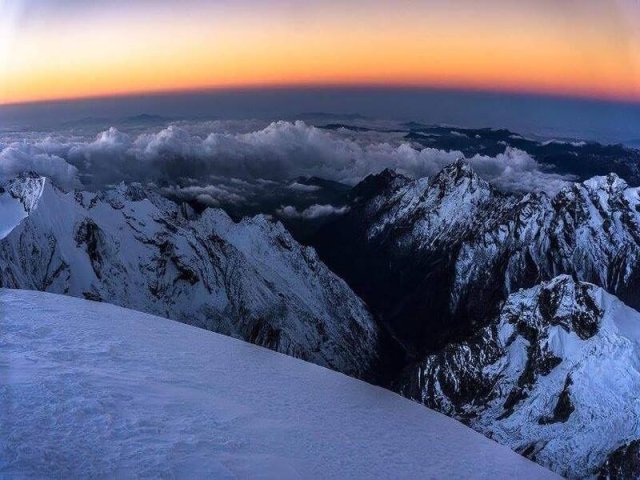 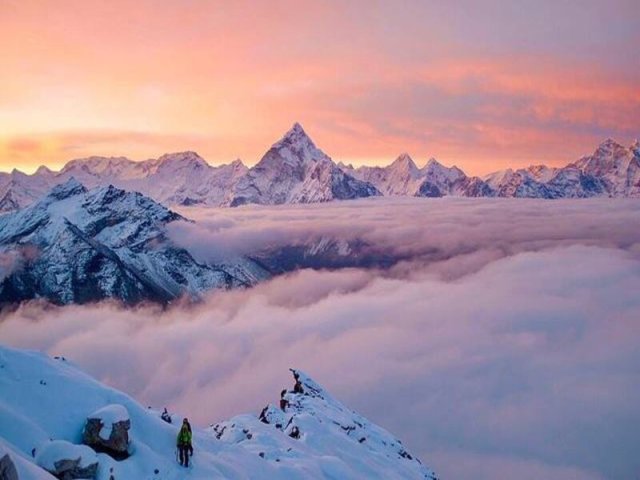 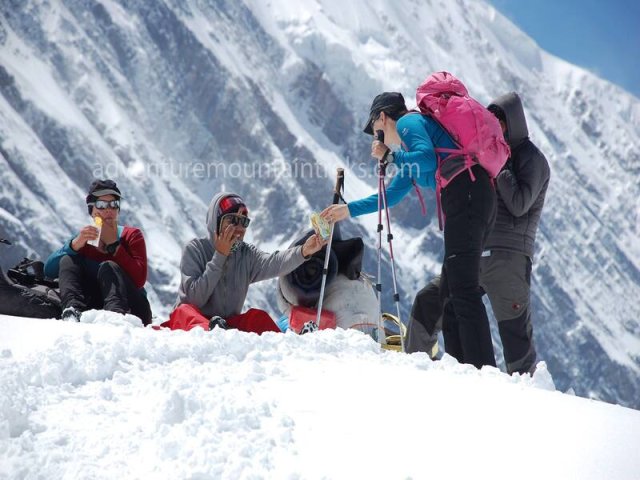 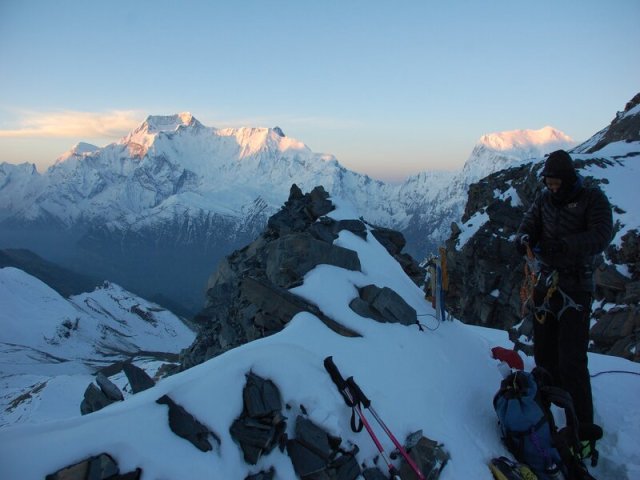 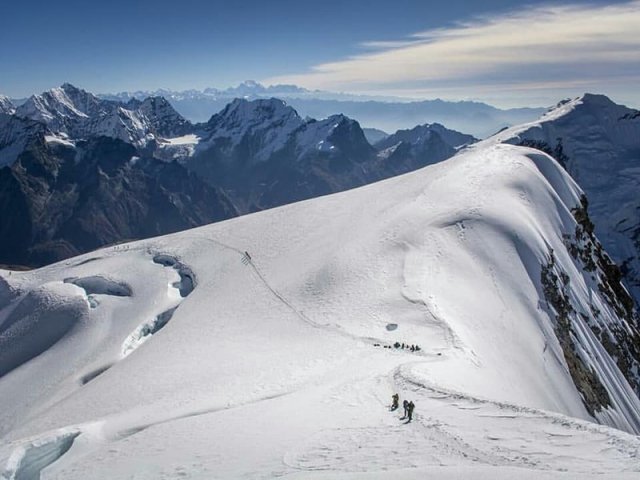 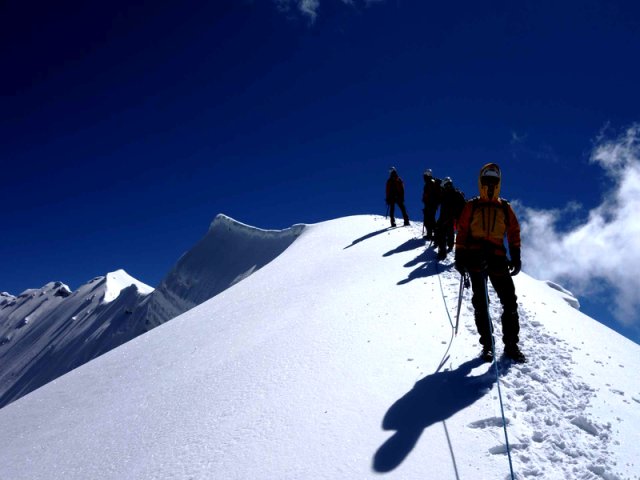 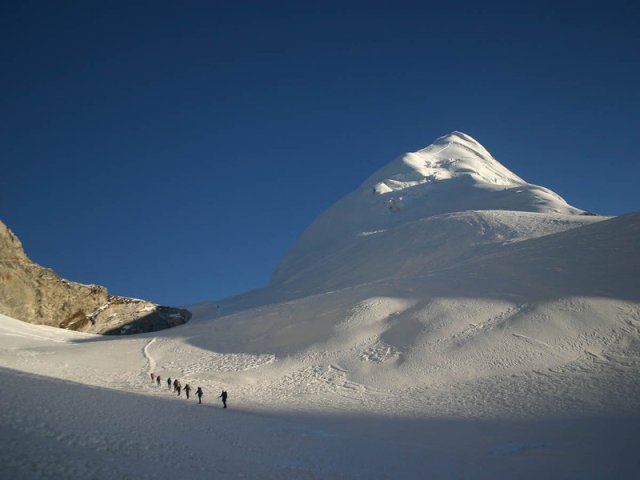 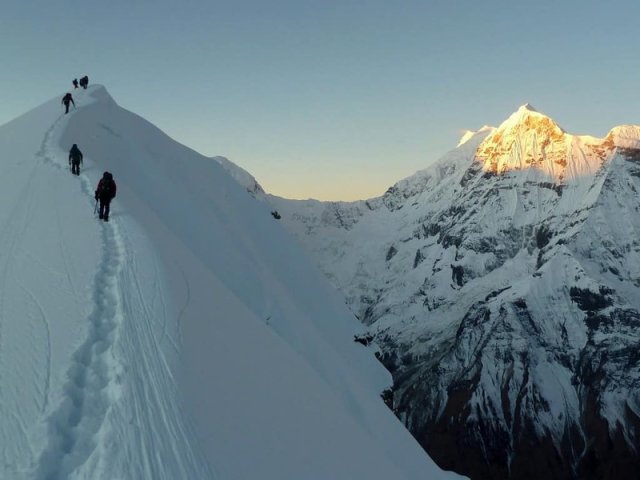 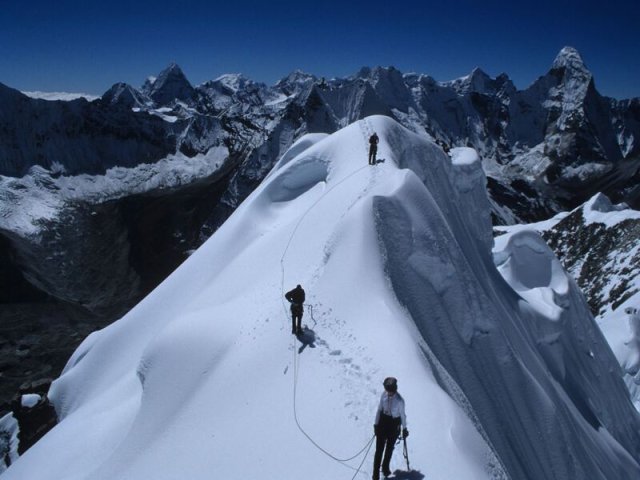