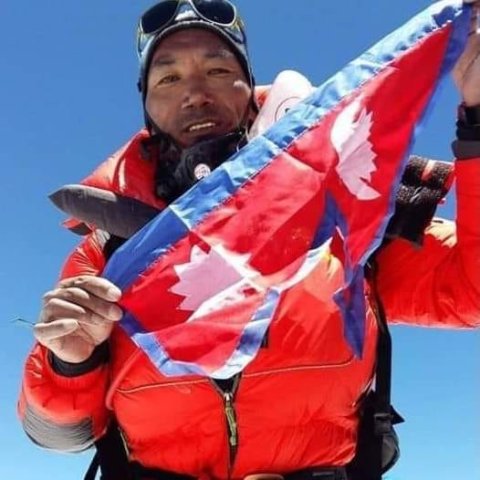 Born in 1970, in a beautiful sherpa village of Thame. First climbed Everest on May 13, 1994, and to date has climbed the summit a record number of times. He achieved the summit while he was out there rope fixing and securing the route to the summit for the other climbers.

For climbers achieving Everest is a dream come true and each year a large number of climbers seek permission to climb Everest. According to the Government report this year 316 permits have been issued to climb Everest. The climbers all depend on the rope fixed by his team and he feels happy to do his job. He feels pride for his people he says, “Sherpas are the heroes of the mountain, without Sherpa nobody is successful“.

We agree with his statement and are grateful for Sherpas who are the true heroes of the mountain. The high altitude mountains with their difficult terrain and topography and dangerous icefall carcasses would be impossible to navigate ifs it was not for our Sherpa guides who risk their all to secure the route. They are the life saviors up in the mountain.

We congratulate the Kami Rita Sherpa for his record-breaking 26th ascent of Everest. We are thankful for heroes like Kami Rita Sherpa and other Sherpas who risk their lives to make the summit possible for all climbers. He is a source of inspiration and motivation for people all around the world

How would you like to congratulate him on his historic 26th  Everest Climb? If you are feeling inspired and looking forward to climbing we do have some awesome packages